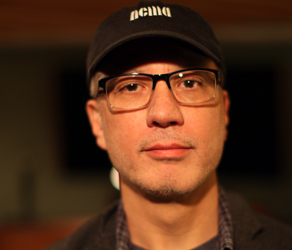 Michael Graziano established his two-decade media career in Los Angeles, CA. Suddenly one day, he woke-up to discover the palm trees were gone, the smog had lifted and traffic moved freely! He was living in Raleigh, NC.

Michael co-directed the author-interview television program “The Artist’s Craft” on Raleigh Television Network from 2007-2012 and currently is the host of the Common Thread radio show on Little Raleigh Radio, which now broadcasts from the Thread Audio studios: http://www.littleraleighradio.org/

An avid reader and book collector, he can often be found in his sprawling library, above the recording studio. Making music still remains his central focus and as a musician, woodwinds, Moog theremin and percussion are his primary passion.